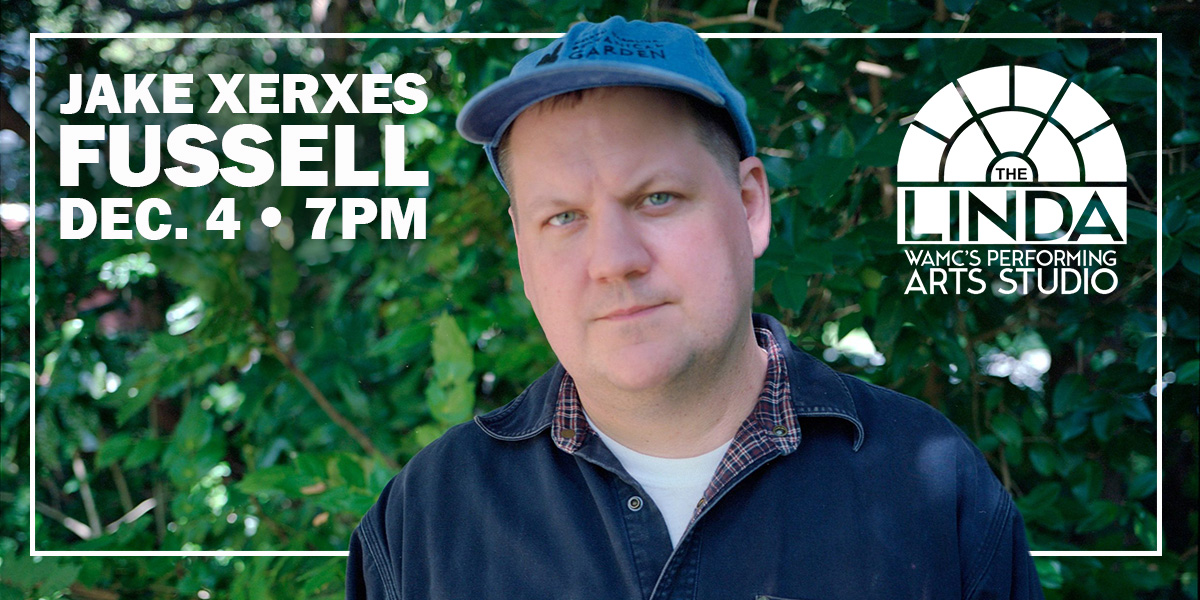 “Fussell is creating his own legacy within the long lineage of traditional folk musicians and storytellers that have come before him.” – NY Times

“So elegant … relaxing in the way that pondering a Zen koan is relaxing, and sweet in the way that the wounded, honey-voiced blues of Miss. John Hurt are sweet.” – Pitchfork

“Music that resides at the seams of Appalachia and the cosmos.” – NPR

“The folk musician’s latest album is a bittersweet collection full of silence and space. Delivered with empathy, his historical subject matter feels rooted in the present.” – Pitchfork (7.7 album review)

Singer, guitarist, and folk music interpreter Jake Xerxes Fussell has distinguished
himself as one of his generation’s preeminent interpreters of traditional (and not so
traditional) “folk” songs, a practice which he approaches with a refreshingly unfussy lack
of nostalgia. By recontextualizing ancient vernacular songs and sources of the American
South, he allows them to breathe and speak for themselves and for himself; he
alternately inhabits them and allows them to inhabit him. In all his work, Fussell
humanizes his material with his own profound curatorial and interpretive gifts,
unmooring stories and melodies from their specific eras and origins and setting them
adrift in our own waterways. The robust burr of his voice, which periodically melts and
catches at a particularly tender turn of phrase, and the swung rhythmic undertow of
exquisite, seemingly effortless guitar-playing pull new valences of meaning from
ostensibly antique songs and subjects.

Fussell’s new album Good and Green Again is set for release on Jan 21, 2022 via
Paradise of Bachelors. Produced by James Elkington, Good and Green Again navigates
fresh sonic and compositional landscapes and is his most conceptually focused and
breathtakingly rendered to-date. Fussell and Elkington enlisted a group of formidable
players hailing from Durham, North Carolina (where Fussell lives) and elsewhere,
including regular bandmembers Casey Toll on upright bass, Libby Rodenbough on
strings, and Nathan Golub on pedal steel. They were joined by welcome newcomers
Joe Westerlund (Megafaun, Califone) on drums, Joseph Decosimo on fiddle, Anna
Jacobson on brass, and Bonnie “Prince” Billy, who contributes additional vocals.
If overall Good and Green Again sounds a little sadder and slower than Fussell’s past
records, well, maybe we’re all a little sadder and slower these days. A smoldering mood
of regret and loss pervades, a distinct vibe of vanitas. But three airy instrumentals, all
Fussell originals, punctuate the program, offering respite and light in the form of crisp,
shuffling play-party tunes, each in turn somewhat more hopeful and exuberant than the
last. Their resemblance to lullabies is, perhaps, not coincidental. Fussell and his partner
welcomed their first child into the world during the making of Good and Green Again.
These lovely songs bear that promise in letters of bright gold.