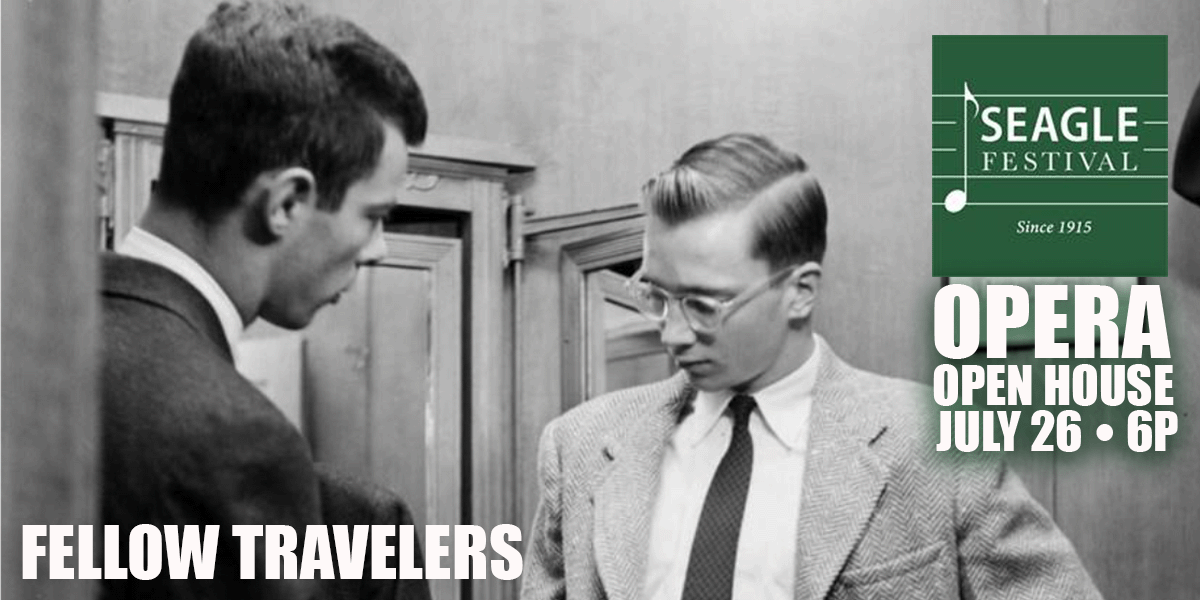 The Linda and the Pride Center of the Capital Region presents

Seagle Festival in an Opera Preview

by Greg Spears and Greg Pierce

Featuring the artists of Seagle Festival, the Composer, Greg Spears and Nate Gray, Executive Director,Pride Center of the Capital Region

FREE AND OPEN TO THE PUBLIC

Join us for a free preview and discussion about the opera, to be performed at Seagle Festival this summer.

Based on Thomas Mallon’s best-selling novel, Fellow Travelers takes place in 1950s Washington, D.C., and follows Timothy Laughlin, a recent college graduate and devout Catholic eager to join the crusade against Communism. A chance encounter with a handsome State Department official, Hawkins Fuller, leads to Tim’s first job in D.C. and – after Fuller’s advances – his first love affair. With Senator Joe McCarthy’s investigations into ‘sexual subversives’, Tim struggles to reconcile his political convictions, his love for God, and his love for Fuller – an entanglement that ends in a stunning act of betrayal.

The not-for-profit Seagle Festival, founded in 1915, is the premier opera and musical theater producing organization in the Adirondack Region of upstate New York and the oldest and one of the most prestigious summer vocal training programs in the U.S. The founder, Oscar Seagle, was an internationally acclaimed baritone and voice teacher.  His son, John Seagle, a noted performer on radio, television and in concerts, directed the Festival for 40 years. For the past 27 years, a team led by Tony Kostecki and Darren Keith Woods, a former opera singer and Seagle Festival artist himself, have helped propel Seagle to new heights in artistry, fund-raising and national recognition. Seagle Festival alumni perform worldwide and share their musical gifts that were nurtured during their time as a Seagle Festival artist.