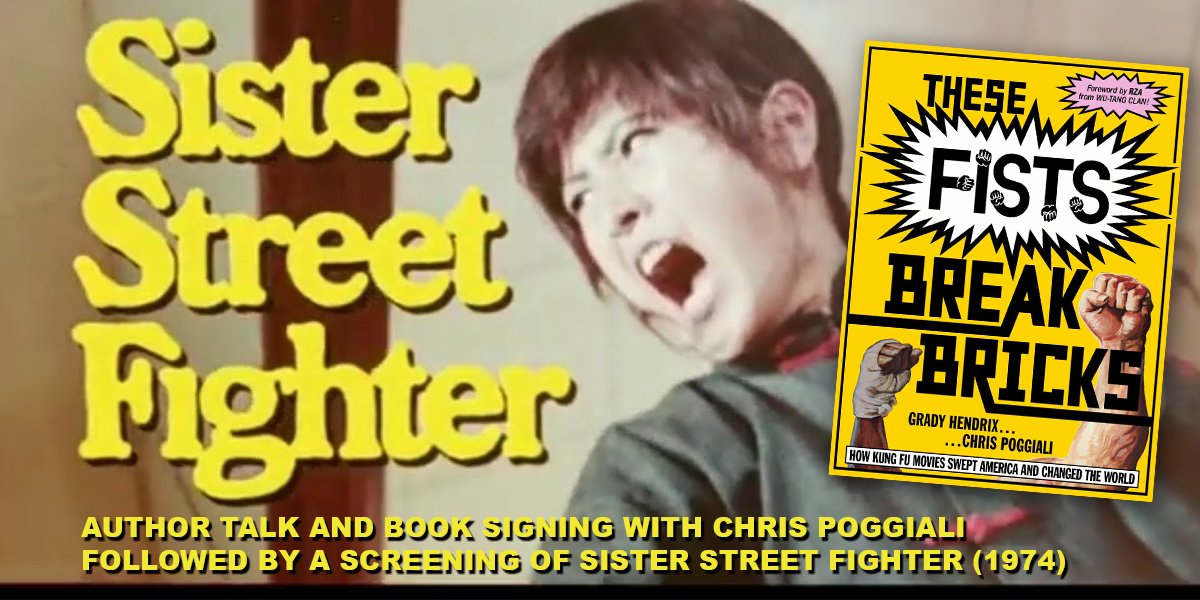 w/Introduction and Q&A with Chris Poggiali, film historian and co-author of THESE FISTS BREAK BRICKS, copies of which will be available for purchase and signing.

Originally titled Onna hissatsu-ken (“Deadly Female Fist”) and planned as an action vehicle for Taiwanese martial arts star Angela Mao, this colorful Toei karate pic instead launched the acting career of 18-year-old Etsuko Shihomi, a protege of Shinichi ‘Sonny’ Chiba and member of his stunt training school, the Japan Action Club. As Hong Kong karate champ Li Koryu, she heads to Japan to find her missing brother, an undercover narcotics agent who has been captured by cartoonish dope smugglers dealing in heroin-infused hair wigs (!) and skilled in various forms of bone-mashing martial arts.

When released in the U.S. in 1976, distributor New Line Cinema cut all the blood and guts to get an R rating, hired Peter Fernandez and his Speed Racer crew to dub all the voices and changed the title to Sister Street Fighter, playing up the presence of Chiba in a supporting role to capitalize on their success with his Street Fighter movies (though SSF was actually the first film in a separate trilogy). “She’s a one-woman death squad! He’s a one-man army! They won’t be hard to find – there’ll be a trail of bodies leading right to them! Karate’s deadliest team in Sister Street Fighter!”

Sister Street Fighter will be screened UNCUT in Japanese with English subtitles. CHRIS POGGIALI recently co-authored THESE FISTS BREAK BRICKS with Grady Hendrix. Poggiali is a film historian and researcher whose essay on the U.S. release of Toei’s karate films is featured in the Arrow Film Blu-ray/DVD release of SISTER STREET FIGHTER. In addition to writing for Arrow Film, Poggiali’s essays have appeared in Blu-ray/DVD releases from Vinegar Syndrome, Media Blasters, Synapse Films, VCI, Something Weird Video and many other labels. He began his professional film writing career at the age of 16 with the launch in 1987 of Temple of Schlock fanzine. In 2008, Temple of Schlock transitioned into its current format as an online blog, while also becoming – in 2015 – a monthly film series at the Alamo Drafthouse Yonkers. Additionally, Poggiali has written for Fangoria, Rue Morgue, Filmfax, Deep Red, Shock Cinema, HorrorHound, Cinema Retro, Turner Classic Movies and other film magazines and their websites.

THESE FISTS BREAK BRICKS tells the story of how kung fu movies came to America, starting with the 1973 Hollywood studio release of Five Fingers of Death. At the time, only a handful of audience members knew the difference between an Iron Fist and an Eagle’s Claw, but that changed overnight as Five Fingers kicked off a kung fu craze that would earn millions at the box office, send TV ratings soaring, influence the birth of hip hop, reshape the style of action we see in movies today, and introduce America to some of the biggest non-white stars to ever hit motion picture screens.