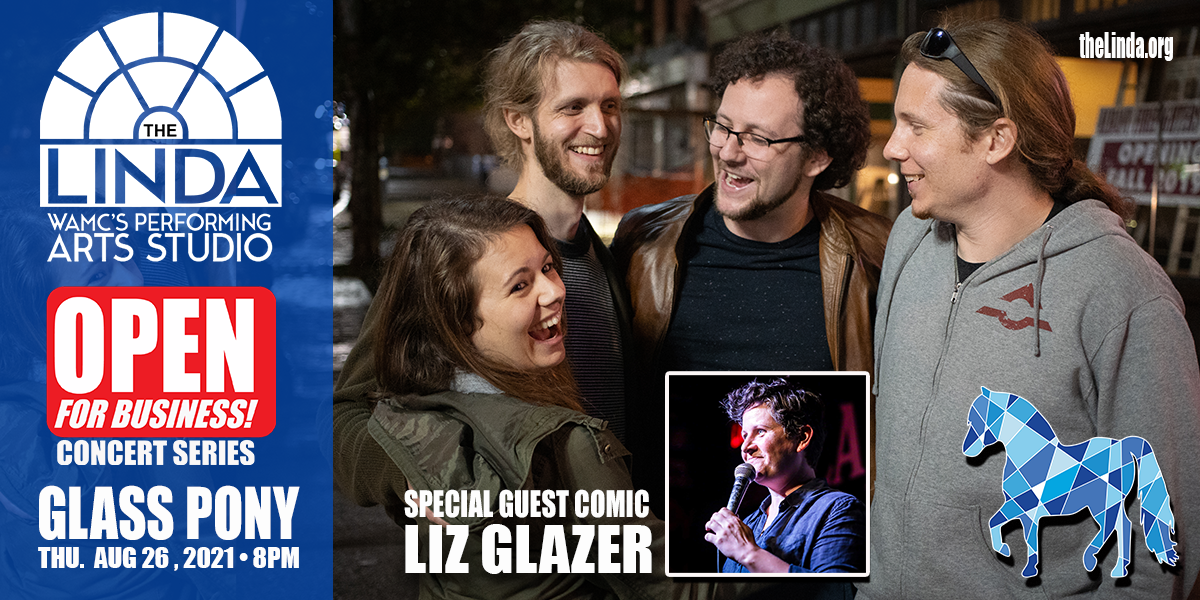 In accordance with CDC, state, and local recommendations, The Linda will require all patrons, staff, and artists to show proof of vaccination against Covid-19. In addition all guests patrons and artists must wear facemasks regardless of vaccination status. This is being done as a safety measure to ensure the health and well-being of our staff, artists, and guests while continuing to provide a top-shelf live experience. Facemasks may be removed while eating or drinking.

Encapsulating influences stretching across decades from psychedelic and jam-focused rock, to funk, post-punk, and even modern indie and post-rock, the Albany, New York collective Glass Pony offer a sound that truly translates through generations, with a stylistic blend built to engage a broad listenership. With a focus squarely set on delivering the most captivating live performance possible, the band utilizes infectiously danceable grooves colored with virtuosic individual performances that deftly blend into a cohesive whole. To accentuate their creative songwriting, they place a great value on improvisation and fluid set lists that change from show to show. The band is comprised of Chanda Dewey (drums), Eddie Hotaling (guitar, lead vocals), Jeff Picarazzi (bass), and Greg Pittz (lead guitar). If you’re seeking an experience that dives much deeper than the usual rigidly-arranged performance, hop on and enjoy the ride.

“…this year’s winners, Glass Pony is a powerhouse of a band with blazing guitar riffs, tight jams, and a melodic groove that is guaranteed to make the people dance.

Liz Glazer is an award-winning standup comedian, actor, and writer. Liz won first place in the Boston Comedy Festival and Ladies of Laughter Competition, has been featured in a full article in the Wall Street Journal (as well as Above the Law, Lex Magazine, the Pennsylvania Gazette, and other publications), and has opened for Myq Kaplan and Maria Bamford. Liz was also a part of the Seattle International Comedy Competition and will be a part of the upcoming HBO Women in Comedy Festival. As an actor, Liz has appeared on ABC’s FOR LIFE and CBS’s BULL, and is on the faculty at Lesly Kahn & Co., the Los Angeles acting studio. Liz is also writing a television pilot about her life, a draft of which was a semi-finalist in the Stage 32 writing competition.