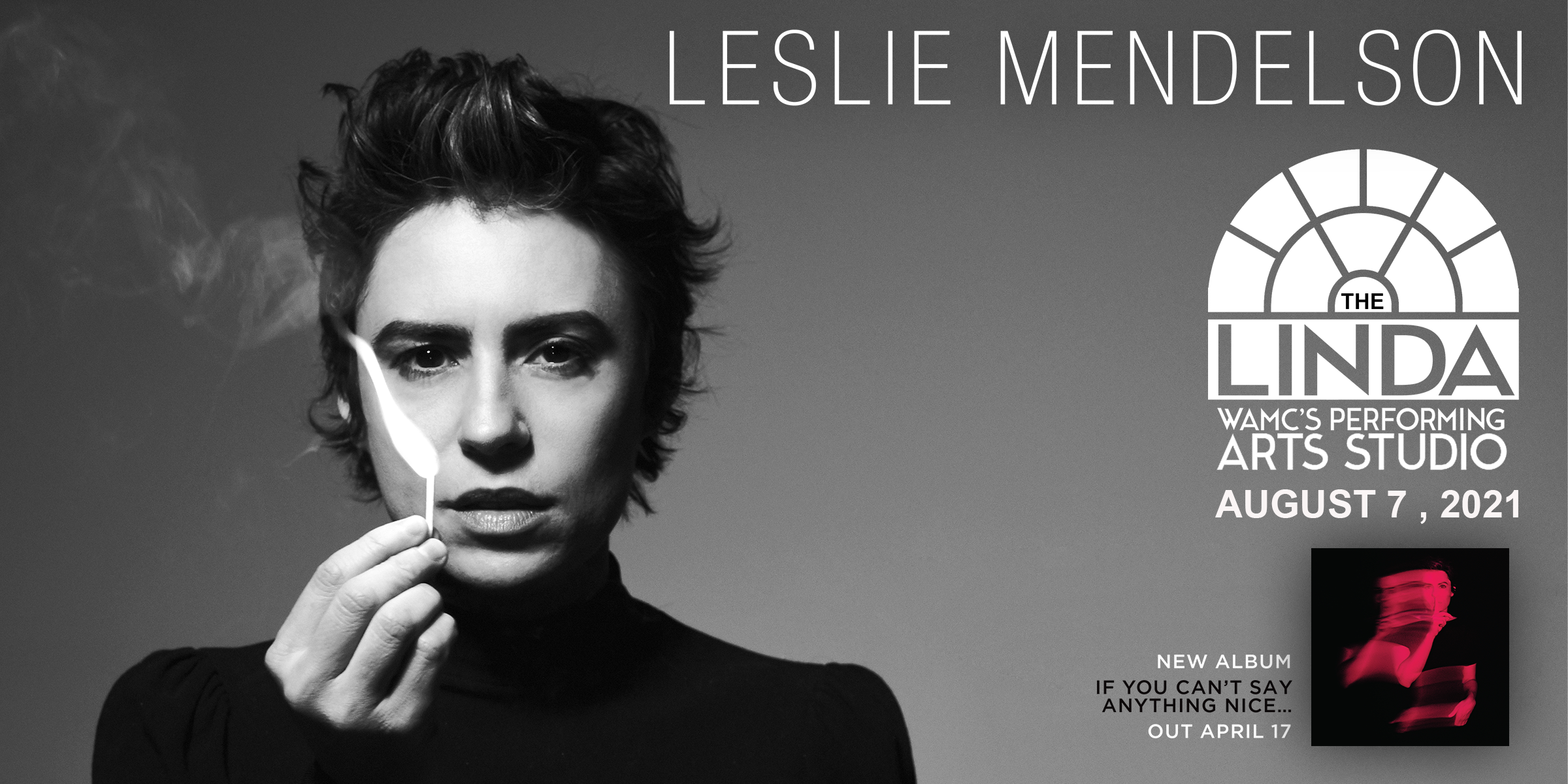 In accordance with CDC, state, and local recommendations, The Linda will require all patrons to wear facemasks regardless of vaccination status. This is being done as a safety measure to ensure the health and well-being of our staff, artists, and guests while continuing to provide a top-shelf live experience. Facemasks may be removed while eating or drinking.

Coffee House Nights at The Linda feature artists, performers, and conversations best enjoyed in an intimate and engaging setting with a hot cup of joe or a delicious craft beverage. Coffee and Tea are complimentary.

Brooklyn-based singer/songwriter Leslie Mendelson is supporting her most recent studio album ‘If You Can’t Say Anything Nice…,’ as well as a solo acoustic EP ‘In The Meantime,’ that was recorded during quarantine earlier this Spring. Described by Relix Magazine as an artist with “a loyal, cross-generational audience that hugs the hippie, hipster, coffee shop and society crowds,” Leslie’s timeless musicality and evocative songwriting indeed cuts a wide swath. All Music writes that Leslie evokes “1970s songwriter influences in the vein of Carole King and Carly Simon,” while The Aquarian declares she is “the closest thing one can get to a truly honest musical experience.”

Leslie Mendelson’s previous work, including 2009 Grammy-nominated debut album ‘Swan Feathers’ and 2017 album, ‘Love & Murder’ dealt with matters of the heart. When it came time to compose the songs that comprise ‘If You Can’t Say Anything Nice…,’ however, she and her longtime writing partner Steve McEwan set out to examine the anxiety stemming from the current socio-political climate with songs like “Medication,” “I Need Something To Care About” and “Would You Give Up Your Gun.” It’s fitting extension of a more socially conscious outlook offered on “A Human Touch”—Leslie’s duet with Jackson Browne for the documentary film, ‘5B,’ released in 2019.

If Leslie Mendelson’s only collaboration with a legendary musician was Jackson Browne, it would be a worthy point to celebrate. What’s truly telling is that Leslie has also drawn the attention of The Grateful Dead’s Bob Weir who recorded a duet with her on Roy Orbison’s standard, “Blue Bayou,” while no less than classic rock royalty The Who invited her to open two shows at Madison Square Garden last year. She was set to open three more dates for the band in 2020 that were unfortunately postponed due to the pandemic. With some of rock music’s most legitimate voices seeking Leslie out, it leaves no doubt the rarefied air she inhabits as an artist.

KWILLEO: To be soothed by sound is to truly feel music. Harnessing over a decade of song writing and performing – KWILLEO builds a sonic bridge between Earth and its inhabitants. KWILLEO is the project of singer/songwriter, Om Quillio, who found themselves in different creative territory after taking a hiatus to heal. With song, KWILLEO aims to help you tap into your own inner alchemy. Sound heals.