You are here: Home / Archives for FOLK 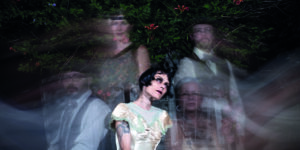 Join us Live on YouTube for a virtual concert like no other with Dust Bowl Faeries, Monday February 1st at 8 pm. Get Online Tickets DUST BOWL FAERIES, Dark Carnival Dream Music “Americana by way of pagan cabaret” Bay Area Reporter, 2020 Dust Bowl Faeries is a dark-carnival band from New York. Their eclectic repertoire […]