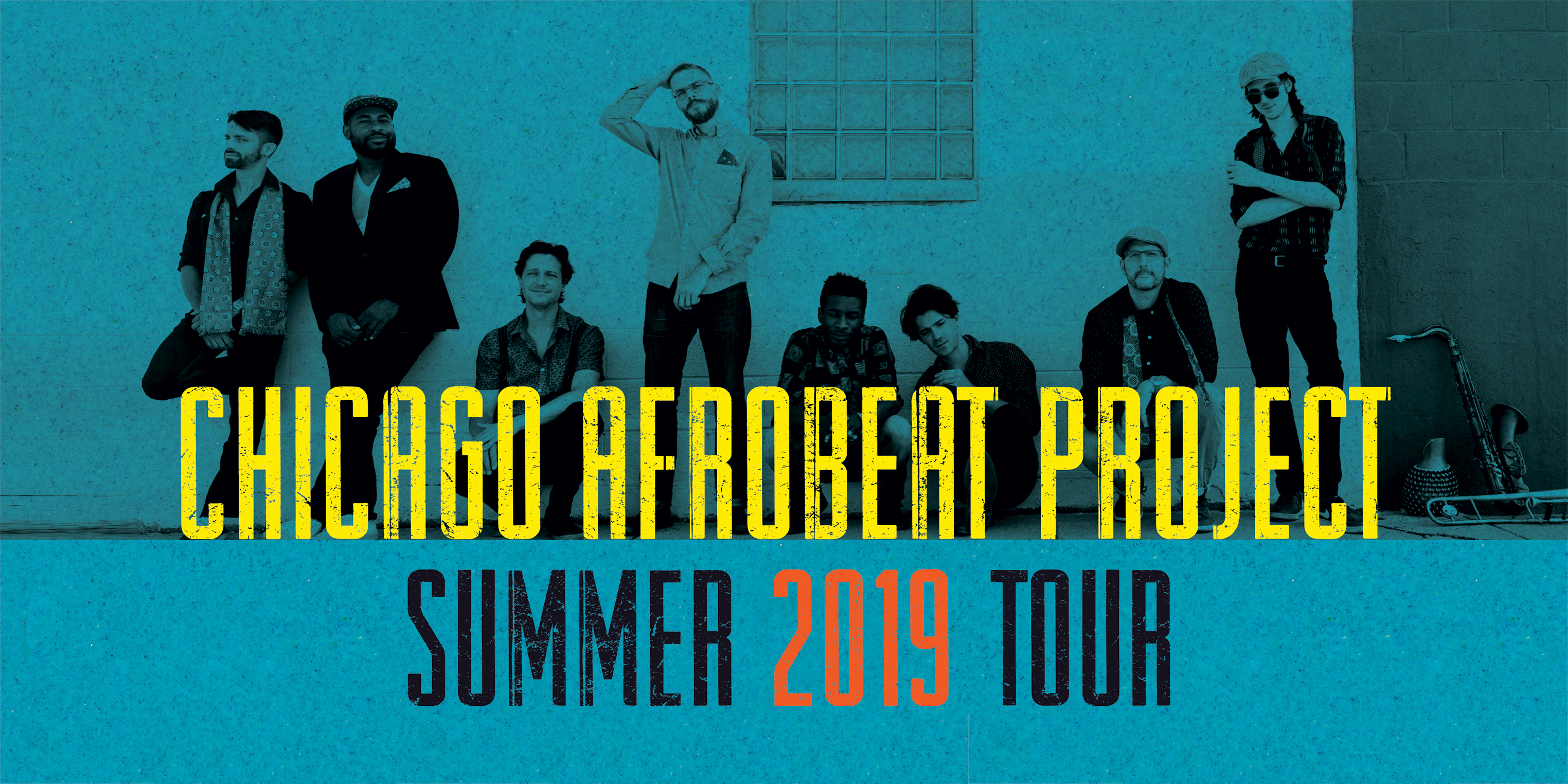 $15 Advance General Admission
$20 At The Door

In 2002, young musicians fresh to the Chicago scene gathered at a Lake Street loft on the West Side of Chicago to create African-inspired music. The sessions were hosted by keyboardist Kevin Ford who had recently returned to Chicago from studying and performing in Colorado. Within a few weeks guitarist David Glines, who was then a recent graduate of Northwestern University joined the session.

Each week a new musician attended the sessions. Horns were brought in by trombonist Mark Thomson and saxophonist Airan Wright, including saxophonists Garrick Smith and Angelo Garcia. Drummer Marshall Greenhouse, who was then teaching at the Old Town School of Folk Music, posted an ad at the school for a bass player. The ad was answered by a late-era Fela Kuti bassist. With the bassist in place, a core group emerged.

Of the many different styles of African music explored, the group found the sound of afrobeat most compelling, both from a performance and lyrical perspective. Fela Kuti’s brilliant and witty commentary on social injustice struck a nerve during the Bush era of the U.S. In attempting to use afrobeat to create new forms and to address the uncertain political climate, the group tapped into their America roots. They brought together elements of rock, hiphop, jazz, and Chicago house influences within an afrobeat framework. After a few months, what started out as an exploratory project had solidified into the band performing at loft parties and concerts: Chicago Afrobeat Project.

In 2005, the band established a monthly live music series called “First Beat,” where the group performed a late-night set from 1-5 AM at The Note in Wicker Park. Dancers Tosha Alston (Ayodele) and Mashaune Hardy, both of whom were performing at the Muntu Dance Theatre, would often perform alongside the band. It was at this time that percussionist Danjuma Gaskin first joined the group.

CAbP used its First Beat series to feature many guest musicians, an approach the group would intensify later in its career. The band backed Jeff Parker (Tortoise), Fareed Haque (Mathgames, Garaj a Trois), Howard Levy, Bobby Broom, and others.

That same year CAbP began touring clubs and festivals and also debuted the independently released, Chicago Afrobeat Project produced by Kevin Ford + Chicago Afrobeat Project. The release is primarily an instrumental album except for one track “Zambi” which features Poetree Chicago founder and late MC Brother Mike (Mike Hawkins), who at the time was living at the same loft where the band rehearsed.

The group toured between its monthly First Beat series and held homecoming shows at the infamous HotHouse (now Buddy Guy’s), an arts and music organization known for bringing top “conscious” talent to Chicago from around the world. It was at this time saxophonists Garrick Smith and Angelo established themselves as core members of the band.

A 5-track EP titled Off the Grid was released in 2009 featuring the track “Media Man” with Ugochi on lead vocals. A remix of the track by Backseat Bingo was included on the track. Prior to the EP’s release, the band immediately began working on its third full-length album, Nyash UP!

Nyash UP!, which was released in 2013 – again independently – features afrobeat versions of classic songs from Fugazi, Marvin Gaye, Radiohead, Led Zeppelin, Ceu, the Talking Heads, and more. During the recording process of Nyash UP!, the band made a core member change, with original drummer Marshall Greenhouse beginning different musical pursuits.

2013 would prove be a pivotal year for the band. In addition to releasing their fourth studio project, the band began collaborating with special guest drummer Tony Allen, considered one of the founding fathers of afrobeat. Allen was Fela Kuti’s original drummer and has since been described by both Damon Albarn and Brian Eno as the greatest drummer on the planet. In addition to a notable solo career, Allen has collaborated with Albarn, Flea, Paul Simonon, Thundercat, Erykah Badu, and countless others.

The cross-Atlantic collaboration between CAbP and Allen, who has lived in Paris for more than two decades, stretched into a multi-year effort when Allen declared at the first recording session that 10 tracks would be recorded — not the two tracks that was originally planned. When the dust had settled over the two years of sessions between 2013-2014, the band walked away with 14 tracks, 10 of which are included on the September 2017 release, What Goes Up.

The compositions for the recording sessions began with Ford and Glines writing the material, assisted by Ableton-programmed drums written by the duo. They wrote and recorded most of the song’s compositions on keys and guitar respectively. With Allen now manning the drum set for the recording sessions from 2013-2014, these “lab” tracks took on a new life.

CAbP members such as trombonist Xavier Galdon, saxophonists Garrick Smith/Angelo Garcia, and percussionist Danjuma Gaskin added parts to the composition over that time. In the second round of recording sessions in 2014, bassist Luc Parcell joined, rounding out what would be more than an album’s worth of material. Core members of the band — Ford, Glines, Smith, and Garcia — then mined the material for tracks with the most “immediacy,” leading to the 10 tracks selected for the album.

In addition to featuring Tony Allen, What Goes Up moves away from the mainly instrumental format of previous CAbP records. Canadian-based Nigerian singer Oranmiyan accompanied Allen at some of the original studio sessions, writing and laying down uplifting verses on the spot, as did Ugochi. Other vocalists such as J.C. Brooks, Kiara Lanier, and Legit (Chance the Rapper), Akenya (Noname, Chance the Rapper), Isaiah Oby, and Rico Sisney/Maggie Vagle (Sidewalk Chalk) also contributed to the project.

It was at Ford’s Fullerton Recording Studios where the band shaped What Goes Up into its final state in 2017. In afrobeat tradition, the lyrics are politically charged, except that vocalists address social and racial injustices, ecological crisis, freedom in expression, and disillusionment in the democratic process. The album continues the afrobeat tradition of using compelling music to speak truth to power.

What Goes Up releases independently on September 15, 2017, with touring to follow.