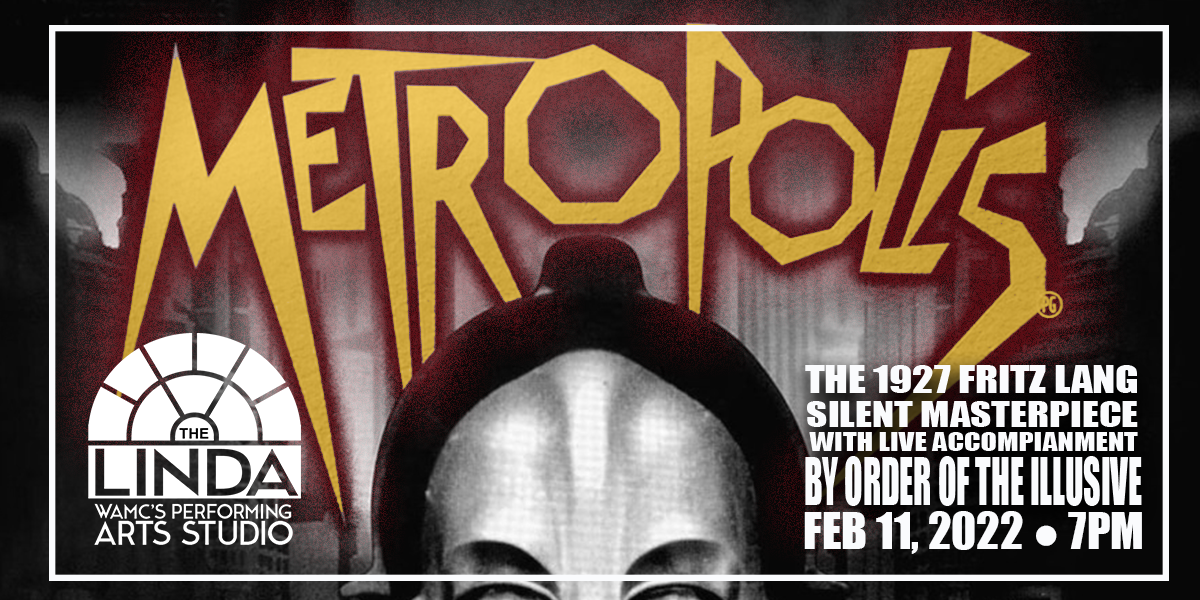 The building that is now The Linda began in 1927, the same year as Fritz Lang’s silent dystopian masterpiece Metropolis. Witness the complete Metropolis with Live Accompaniment by Order of the Illusive, the project of Bradford Reed (King Missile III , inventor of the pencilina,) and Zach Layton.

Directed by Fritz Lang and his wife, Thea von Harbou, “Metropolis” takes place in the year 2000 in the mythical setting of Metropolis. This German story is a utopic vision of a Marxist society that goes too far. The protagonist, Jon Frederson (John Masterman in the English version) and his son Freder Frederson are members of the wealthy class, living high above the proletariat of yeoman workers who are crowded together in the urban squalor of Metropolis. Despite the dictatorial demands of his father, Freder Frederson moves among the masses and falls in love with an outspoken woman of the working class named Maria. However, Jon Frederson does not approve of the association. With the guidance of the evil scientist Rotwang, Jon vies to gain control of the working class. To accomplish this, Rotwang kidnaps Maria and designs a robot in her image. According to plan, the robot Maria introduces chaos into the world of the workers. But, ultimately, both the robot Maria and Rotwang are destroyed; Freder Frederson rescues Maria and they live happily ever after; and Jon Frederson even learns to like the workers. Within the context of the film, the robot Maria is important as a catalyst that institutes anarchy into the structured world of the working class. Considering the prolificness of Fritz Lang and the international popularity of “Metropolis,” the robot Maria stands the first major robot in the history of film.

Bradford Reed (pencilina and drums) is Brooklyn, NY based composer, multi-instrumentalist and producer who fights and tames the idiosyncrasies of the pencilina, an original instrument of his own design and construction which he’s performed with worldwide over the last three decades. He played with King Missile III (and produced 4 of their records) and in the Blue Man Group’s original band. He currently plays with Satellite and the Harpoonist, Ohmslice and Anthems of the Void. He’s composed for film and television including the music for the first season Superjail! on Adult Swim and 3 seasons of Ugly Americans on Comedy Central and has had residencies at The Sundance Composer’s Lab, The Ucross Foundation, Pioneer Works and The Banff Center for the Performing Arts.

Geoff Gersh (guitar) is a guitarist, composer and improviser based in the NYC area. He explores the sonic boundaries of the electric guitar with and without the aid of electronic devices and found objects to produce sounds one would normally not associate with the guitar. His music moves between the worlds of ambient, drone, improvisation and experimental

music. Geoff has had the opportunity to perform and collaborate with Pauline Oliveros, Jonathan Bepler and many other musicians, choreographers and visual artists domestically and abroad. He has 3 CDs on Pauline Oliveros’ Deep Listening Label as well as a number of self released titles under the name Ambient Fields including the latest CD, Ólafsfjörður, released in early 2020. Geoff has received grants from the Foundation for Contemporary Arts, Meet the Composer, American Music Center, Creative Connections Arts Fund at the Vermont Community Foundation, Lower Manhattan Cultural Council and has participated in the Banff Early Fall Musicians in Residence Program (Andres Segovia Memorial Endowment), Banff Winter Musicians in Residence Program (Banff Centre Artists’ Award), Listhus Moving Lights Residency in Olafsfjordur, Iceland and Audiotalia Summer Camp in Barcelona, Spain.