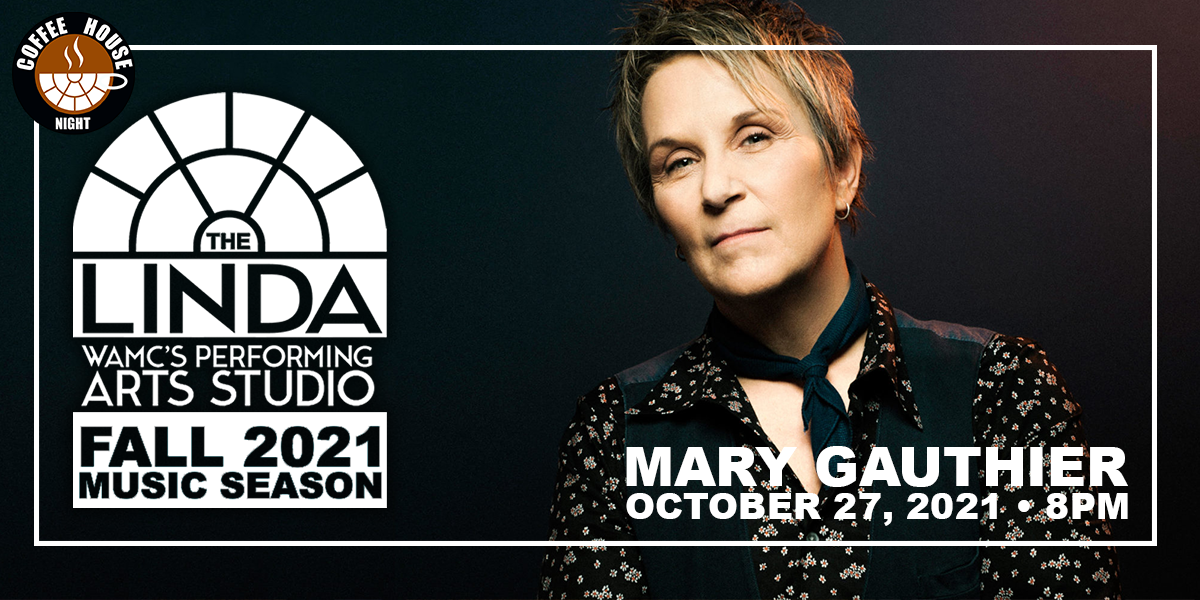 Mary Gauthier’s Rifles & Rosary Beads is a collection of songs she co-wrote with US Veterans over the last five years through Songwriting With;Soldiers, a non-profit that offers Veterans a chance to work with professional songwriters. The songs on Rifles and Rosary Beads tell the story of the affect war has had on the Americans who’ve served, and their families. “You’ll be hard pressed to hear a more powerful moving work this year – or any other.” Randy Lewis, LA Times. The Americana Music Association has nominated Rifles and Rosary Beads for Record of the Year, and Entertainment Weekly named it one of the 10 best records of the year, so far.

Mary Gauthier is a regular on Grand Ole Opry, and has had songs recorded by Tim McGraw, Blake Shelton, Jimmy Buffett, Bobby Bare Sr., Bettye Lavette, Amy Helm, Mike Farris and many others. Eight albums into her career, she was named, “One of Americana’s most admired artists across the US and around the world,” by The Wall Street Journal, noting her “razor-sharp eye for detail and her commitment to unsentimental self-reflection.”

On the heels of her debut album Red Rescue, hailed by many as one of the top Americana albums of 2018, Jaimee Harris does not disappoint with the release of The Congress House Sessions, a thoughtful, intimate EP with stripped-down recordings of some of her most requested songs. These new recordings, recorded at the storied Congress House Studio by Mark Hallman (Carole King, Ani DiFranco, Eliza Gilkyson) and Andre Moran (Sarah Borges, Rickie Lee Jones), feature some of Austin’s favorite players, including Jane Ellen Bryant and Kris Nelson on backing vocals, Ray Bonneville on harmonica, Brian Patterson on electric guitar, and Sammy Powell on piano.

Don’t let the healthy list of players mislead you; this is no large, speaker-rattling production. Longtime friends add color and texture, but what you’ll hear is Harris and her guitar, delivering her songs in a setting closer both to what they were at their inception, alone in her room with a guitar, and how they have developed after a few years acclimating to performing without a band.

Jaimee Harris loves fronting a band, and it shows. During the years she built a devoted critical and popular following in Austin, Texas, she fronted a slate of seasoned musicians with admirable swagger. When she alighted upon the scene, this jaded music city, replete with (and weary of) singer-songwriters, woke up and took notice. Here, finally, was a new voice—yes, her singing voice is noteworthy: rich, sonorous, full, delivering a uniquely stylized, throaty tone—but equally important, here was the new voice of a noteworthy writer and performer.

If you meet Harris today, you’ll want to be her friend. And no matter what part of the country you’re in, if you spend a day with her, she will convince you to meet up at a nearby roller coaster park/pinball arcade/skeeball hall she happens to know is awesome. She will share embarrassing stories and laugh at your worst jokes (either because she finds them funny or because she finds hilarious how bad your jokes are). Later, when you watch her sing, she’ll break your heart, cradle your heart, win your heart, then break it all over again.

The next day, you wouldn’t be the first to feel jealous. This friendly, breezy, beautiful swirl of platinum hair, impossibly high cheekbones, and a winning smile has it too easy, you think. Talent and looks? Gag me. While a cliché in this age of ubiquitous self-improvement empathy memes, it holds true that you never know what someone is going through or has been through. Jaimee Harris has been through plenty.

Well, I never thought I could be free

After all those nights in the D.O.C.

‘Cause I never thought I could be free

Freed myself of the hell I was in

Asked the Lord to keep me clean again

In case you wonder about a young person penning “Snow White Knuckles,” there is no minimum age requirement for confronting addiction, depression, self-doubt, and good old-fashioned dysfunctional relationships, and Harris writes what she knows. Delivering lines that testify to her keen insight while keeping things conversational and cool, Harris accomplishes what songwriters most long to do: carve out words and a melody to give voice to that feeling you couldn’t quite put your finger on.

In a depressive state—how long will I feel this way?

Is it forever? In my mind prisoner

Will I be okay? Will I ever be okay?

And not someone that everyone hates

Will I ever be okay?

It’s not unique to have a crisis of confidence. We carry around knowledge (or nagging suspicions) of what is beyond our capability and dread being called upon to do what we cannot do well. Jaimee Harris faced an eighteen-month-long pop quiz when she joined partner Mary Gauthier on her relentless tour schedule, facing stages for the first time on a regular basis as a solo performer. This was not what Harris signed up for when she left her desk job earlier that year. This was not the performance scenario she had been building to for a half dozen years, having spent countless hours rehearsing and honing her sound with a set group of players. She called friends from the road, unsure of herself, apologizing for her insecurities, afraid of sounding ungrateful for the opportunity laid before her.

Give up easy. You’re starting to hate me.

Eventually, Harris had a full-on breakdown while on tour overseas. She credits Gauthier for giving her the support she needed, and night after night, as she felt herself improving as a solo performer, her confidence returned. What she could not have known was that the very leg of the tour that felt like her breaking point would lead to the next turning point in her career. Red Rescue landed in the hands of Marcel Albers and Rose Spearman of M.A.R.S. Worldwide and resulted in Jaimee’s first record deal.

Harris demonstrates that despite being a capable bandleader, her talent and command of her craft is undeniable, accompanied or not. Just as the cast of players on The Congress House Sessions might lead a casual observer to assume this is a full-band record, the thoroughly convincing delivery on the EP’s tracks might cause you to believe Harris is done playing with others. You would be wrong. Harris is much in demand as a collaborator, both as a songwriter and a background vocalist (Ray Wylie Hubbard, Malcolm Holcombe), and you’ll find her playing lead guitar with Mary Gauthier. And when circumstances thrust her onto a stage fronting a band, she has no problem summoning her natural confidence as a bandleader, wearing the role comfortably like her red leather jacket. Whether there’s a rhythm section thumping behind her, or whether she’s alone with her Gibson “Gillie” on an empty stage, all eyes and ears are locked on Jaimee Harris.